The market bustles with clatters and shouts, the air clogged with the scents of perfumes and spices.

Dozens of stalls are crammed together under brightly colored cloth shades that barely keep the icy pre-winter wind at bay. A man conjures fire from his hands in the distance, the flame flickering dangerously close to the shades. Next to him is a stall, its wooden counter laden with dyed threads and beads. An old woman raves about her wares to haggling passersby. Children play in the dirt, chasing each other with mud-drenched sticks.

I glance over my shoulder, looking for any signs of the Red Shields, the Queen of Althuria’s most fearsome guards. But nothing is out of place. In my Luminus Academy uniform, few vendors pay me any attention. Others take a closer look, frowning at my red hair, green eyes, and light brown skin. Despite the uniform, my features mark me as an outsider. I know there’s no way for them to know for sure, but I feel that they can smell Amberwood on me. Amberwood, where the most impoverished live. Althuria’s outskirts.

Two months ago, I lived in a hut in Amberwood and worked as a cleaner in the Arena. One night on my way back from work, I was attacked. I disintegrated a gate and knife in my desperation, unleashing a rare form of magic: void magic, which grants me power over time. The next day, I received an acceptance letter to the Luminus Academy, where I learned to control that magic.

But the Queen wants control over the void, and now I’m being hunted. I need to warn my sister, but Professor Sylvester, head of the Academy, insists I remain hidden. He believes that if the Queen gets hold of me, war will erupt with our neighboring kingdom, Lanthany.

But he can’t understand my concern. He doesn’t know how strange it is that Althea missed my sixteenth birthday two weeks ago. That’s why I sneaked out of the Academy—to wander the market today, hoping she will turn up.

It’s past noon, and there’s no sign of Althea. A sickening dread forms in my stomach. She’s been missing for far too long. I don’t know what to do.

I inspect the blacksmith’s handiwork on a rack of brass spoons. I feel his gaze upon me and inwardly wince. Looking up, I realize he’s leaning forward, readying to convince me to buy his wares.

I rush away, pretending something else has caught my eye across the aisle. As soon as I’m out of sight, the tension eases from my muscles. I should head back to the Academy, but I can’t bear leaving without seeing Althea. I’ve risked too much already by slipping away and coming here.

Ellhoris’s local markets flow into one another. It is Althuria’s busiest city, after all. I cross the aisles from the wares section and head west to the food, where people line up at Mrs. Turner’s stall. I breathe in the dizzying, sugary scent of pastries, rolls, and loaves of bread wafting in the air.

“Asha!” Mrs. Turner shouts over the din, patiently handing out frosted cakes into outstretched hands while her husband collects the coins. “Come and have some cake!”

My mouth waters, but I stop before reaching her stall. I need to focus on searching for Althea instead, not indulging in the delicious treat in Mrs. Turner’s hand.

So, I shake my head. “I’m fine, thanks!” My attempt to appear cheerful doesn’t convince her.

“Now, now,” she tuts, eyebrows furrowed. “No one turns down my cake.” She hands her platter to a helper beside her and walks over to me.

“I’m not hungry, Mrs. Turner. Have you seen Althea?”

Mrs. Turner shakes her head. “I haven’t seen her in quite a while. Is everything all right?”

My heart sinks. “Yes, of course. You know how busy they get at the hospital.” My voice comes out dreary and lifeless.

She opens her mouth, hesitating before clamping it shut. She smiles. “It’s not like her to miss the market. Perhaps she’s back at home?”

“Are you looking for her? You’ve been ambling around the market for hours.”

Before I can disappear, she shoves a piece of cake into my hand. I thank her quickly before rushing away. I don’t have much of an appetite, so I hand the bowl to a beggar beside a butcher’s stall when Mrs. Turner isn’t looking.

I pass more beggars clutching the dusty ground with their empty fists as I walk. Before going to the Luminus Academy, I never noticed their long fingers. I never noticed the phosphorus glow to their skin. I never stopped to wonder why it was always dwarves and Lanthans begging on the streets or why they struggle to travel back to Lanthany.

But now it stands out as clear as night and day. I know about the Queen’s little games. I know about her actions to hurt Lanthany and her discrimination against Lanthans. All to start a war and take control of their Eternos tower.

As I make my way back to the Academy, a separate train of thoughts takes over and barrels through my mind.

Mrs. Turner is right. Althea is probably at our home in the forests. The only way to confirm that is to catch the train and see. If Kestrel or Flynn never left the Academy, I could ask them to check on her. But since the last day before the break, they disappeared into Amberwood. In fact, Kestrel has made it clear that he and his brother won’t be back after the break. I was going to see him out of the Academy…just before Professor Salone, my Herbs and Potions teacher, kidnapped me.

She trapped me in a storage room and performed blood magic on me. It forced me to encounter the Queen of Althuria in the void, and I was helpless as she drew in my life energy. I escaped, but barely. By now, the Queen will have captured Professor Salone and used her to find my identity and the identity of everyone I care for. She’ll hunt them down.

Hopefully, the Queen doesn’t yet know of my home in Amberwood. Even if she retrieves my Academy application, she’ll only find my name, my sister’s name, and my former workplace, the Arena.

But with time, her spies, and her resources, she’ll find us. Inevitably.

What if Althea is sick? Bedridden? Does she need a healer? She might be vulnerable right now.

Lost in my thoughts, I nearly bump into a child and her muddied stick. A crash sounds. I look up to see the small girl bounce off the stand of dyed beads, causing them to roll right onto the ground. The seller glares at her, and the girl backs away with a sheepish grin. An enormous clatter cuts through the noisy bustle. The wooden counter topples over, and the girl has no choice but to dart back into the crowd, becoming invisible in a matter of moments.

The seller, an elderly woman, stares helplessly at the throng of people and tries to save whatever remains of her goods. I want to help but can’t. Anything that makes me stand out even in the slightest could end with my head on the chopping block. So I can only watch the beads and threads be trampled beneath the feet of unaware bargain hunters.

I’m so distracted by the chaos unraveling before me it takes a while to notice the sudden silence in the market. The shouts drop to whispers. The clatter of beads on the ground suddenly seems deafening.

I glance around at the sellers. They look down at their wares, at the dust on their shoes, everywhere except up. That’s when I see them.

Red Shields in their black and red uniforms walk purposefully through the aisles. One of them shouts something. The words “red hair” reach my ears. The man leading the group has scars marring his face, and I can’t help but wonder where I’ve seen him before.

The press of people around me obscure my view, but the distinct design on the man’s lapel—the red, black, and white swirls that have been haunting my dreams for the last couple of weeks—is clearly visible: the Red Shield insignia. And not just any insignia—it’s plated with gold. He’s got authority within the Queen’s most elite guards.

Run. Every fiber of my being screams at me, but I remain frozen. Turning tail now will only make me look guilty. Still, I try to hide my face from them and put the hood of my cloak up, pretending to inspect a nearby stall of herbs.

But moments later, a hand clamps down on my shoulder, startling me. 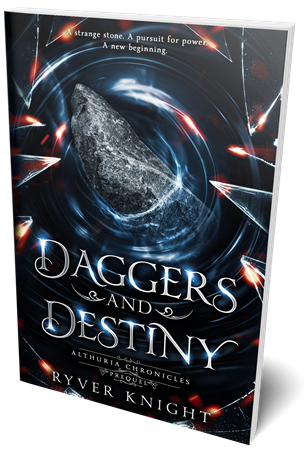 Subscribe to my newsletter to receive Daggers & Destiny for free!